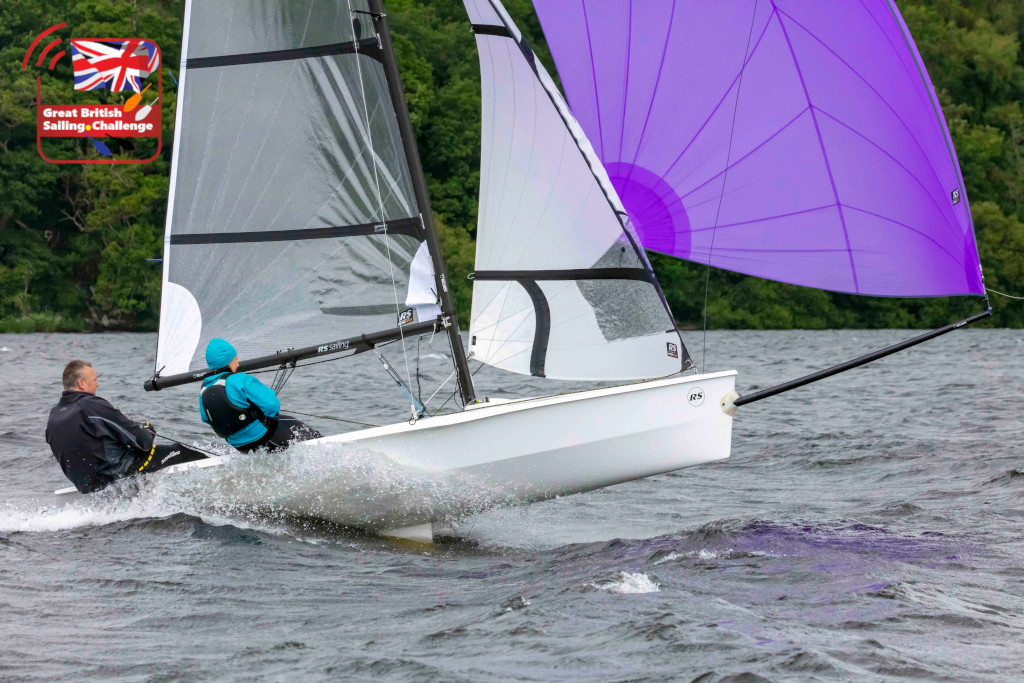 It has been three years since the last Bala Long Distance weekend, so it was good to see Bala Sailing Club successfully deliver a well-received event.

Despite the not so favourable weather there were 40 advance entries,  ranging from a foiling Moth to a Mirror, covering all types of dinghies,  cats, and sports boats.  With the gusty conditions on both days,  there were quite a few boat and rig changes.

With a 30 kt + rain squall battering the lake just before the scheduled 13:00 Race 1 start on Saturday,  PRO Mike Butterfield raised the AP,  much to the relief of most competitors.  The squall soon passed and the fleet was away at 13:15 to race the full length of the beautiful Lake Bala encompassing 5-mile laps.

With wind ranging in strength from under ten knots to gusts of  20 + kts, the finish line was opened after two hours,  with the faster boats completing four laps and the slower ones just 1 lap.  The Foiling Moth of Brad Gibson and locals Paul and Jude Allen (F18),  enjoyed a close battle for line honours,  often trading places over the next two hours.   In the end, the Moth crossed the line after four laps,  but less than a minute ahead of the F18.   After times had been adjusted to Great Lakes and average laps, Paul and Jude Allen (F18) were overnight leaders,  from a couple of visiting RS400s,  with Chris Pickles and Matt Sharman (Bassenthwaite SC) in 2nd,  Stuart Halman and Anna Walsh (Leigh & Lowton SC), third.  For Paul, who has been competing in this iconic event for the last twenty years,  he was hopeful it could be his turn to lift the coveted trophy.

Saturday night saw some of the legendary Bala SC hospitality with a live band,  and some great pizzas from a visiting Stone Baked Pizza Oven, cooked in the traditional way.

As the competitors arrived for day 2,  the forecast of wind and rain was pretty accurate and discouraged most to retreat to the comforts of the clubhouse and only eight boats to venture out.  Given the deteriorating weather,  the PRO sensibly set a much shorter course,  with the turning mark halfway up Lake Bala.  Chris Pickles and Matt Sharman (RS400 Bassenthwaite SC),  stormed away from the start line and led the race till the finish,  they managed to build up such a comfortable lead,  even a capsize couldn’t stop the pursuing pack.  Fellow RS400 sailors Stuart Halman and Anna Walsh  (Leigh & Lowton SC) were second,  also completing three laps, and on corrected time the RS200 of  Alex Cleaver and Olivia Smith (Budworth SC)  third,  with only five boats finishing, 4th - Gordon Keyworth (K1),  5th - Paul Young and Megan Ward (Enterprise Midland SC)

The 2022 Bala Long Distance event was very much a battle of attrition,  Chris Pickles who was the runner-up in the last running of the event in 2019,  was crowned the overall winner crewed by Matt Sharman in a RS400,  with Stuart Halman and Anna Walsh (RS400 Leigh & Lowton SC) second and Alex Cleaver and Olivia Smith (RS200 Budworth SC),  third overall.
Results
With some strong gusts, some impressive speeds were recorded on the SailRacer GPS trackers,  with Brad Gibson in the Foiling Moth hitting over 25 knots on occasions,  and nearly 17 knots on a sustained 20-second basis.  Paul and Jude Allen (F18) were second fastest,  and John Tuckwell and Mike Cleaver (Hurricane 5.9 SX), were third fastest.
On adjusted speeds, it was no surprise to see overall winners Chris Pickles and Matt Sharman (RS400) fastest,  followed by Stuart Halman and Anna Walsh (RS400).

SailRacer GPS Tracking
The Bala Long Distance Weekend was the fourth round of the 2022 Great British Sailing Challenge,  with the next and final event the Medway Marathon (6th August 2022).

The Great British Sailing Challenge is a series of handicap racing events that take place throughout the year, covering a variety of locations, race formats, and different water types. Competing sailors will earn ranking points from each event they compete in, with three events required to qualify for the overall rankings.  The series is managed by RestartSailing (RYA affiliated)

9-10 April 2022 - Cheddar Ales Chase,  Bristol Corinthian YC
A weekend of average lap and pursuit racing at this picturesque location between Axbridge and Cheddar. Cheddar Reservoir is set in one of the most beautiful parts of Somerset, with Cheddar Gorge a short walk or drive away and Glastonbury Tor visible in the near distance.

6th August 2022 - Medway Marathon, Medway YC
The Medway Marathon is a long-distance race to the mouth of the River Medway and is set on a stretch of water of great historical significance.  Dinghies with a Great Lakes handicap PY of 1315 or less were eligible to compete alongside the local keelboat fleets of International Dragons, National Sonatas and National Squibs.

The Great British Sailing Challenge is a series of handicap racing events that take place throughout the year, and it's open to pretty much any sail-powered craft. The Challenge will involve events throughout the whole year, with the target of around 100 boats taking part in each event on larger waters, and running events close to capacity on smaller lakes and reservoirs. Competing sailors will earn ranking points from each event they compete in. The series is managed by RestartSailing.