DATES FOR SEASON #2 OF THE GREAT BRITISH SAILING CHALLENGE 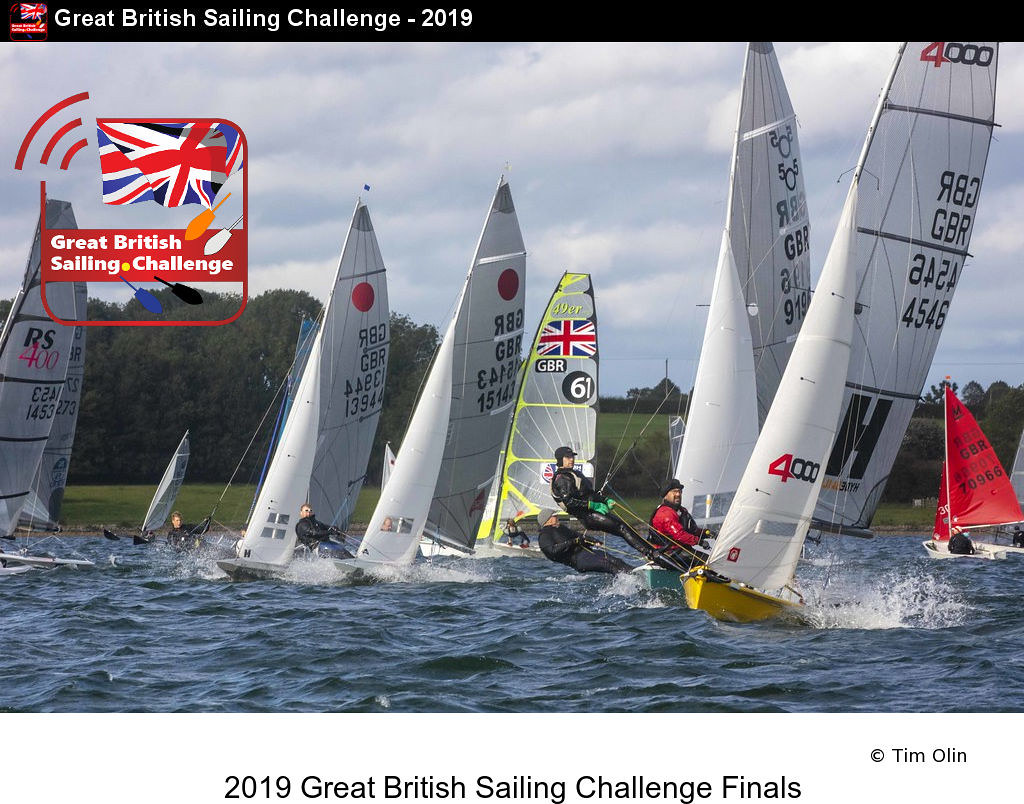 Like its sister circuit, the Selden SailJuice Winter Series, season #2 of the Great British Sailing Challenge offers handicap racing for dinghies and small craft of pretty much all shapes and sizes...

The Fernhurst Books Draycote Dash took place in November, marking not only the first event of the Selden SailJuice Winter Series but also the 2019/2020 edition of the Great British Sailing Challenge (GBSC).

Competitors in the Selden SailJuice Winter Series are automatically entered into the inaugural season of the GBSC, which concludes next autumn at a100-boat invitation-only Grand Final.
The dates are now out for the events and clubs that have signed up to the 2020 spring/ summer season of the GBSC. If you’re interested in hosting an event at your club, whether for 2020 or even 2021, please get in touch...
Dates for the GBSC 2020 events already agreed are as follows, with a couple more awaiting confirmation:
Bristol Corinthian Yacht Club
4th-5th April 2020
Weston Grand Slam, Weston Sailing Club
11th-12th April 2020
Paignton Open for Single Handers (P.O.S.H.),  Paignton Sailing Club
9th-10th May 2020
Grafham Sailing Club
23rd-24th May 2020
Rutland Sailing Club
13th-14th June 2020
Wilsonian River Challenge, Wilsonian Sailing Club
20th-21st June 2020
Bala Long Distance, Bala Sailing Club
20th-21st June 2020
The Ullswater Ultimate, Ullswater Yacht Club
15-16 August 2020
Grand Finals, Venue To be Confirmed
September/ October 2020
Want your Club to host a GBSC event?
We’re always open to hearing from clubs that want to host a multi-class handicap open meeting. We’re also looking for more bids for next year’s Grand Final. Contact Andy Rice at andy@sailjuice.com
Note that this season’s GBSC is already underway as the events in the Seldén SailJuice Winter Series 2019/20 also serve as the early part of the GBSC season:
Fernhurst Books Draycote Dash, Draycote Water Sailing Club
23 & 24 November 2019
Datchet Flyer, Datchet Water Sailing Club
7 & 8 December 2019
Brass Monkey, Yorkshire Dales Sailing Club
27 December 2019
Grafham Grand Prix, Grafham Water Sailing Club
29 December 2019
Bloody Mary, Queen Mary Sailing Club
11 January 2020
King George Gallop, King George Sailing Club
26 January 2020
John Merricks Tiger Trophy, Rutland Sailing Club
1 & 2 February 2020
Oxford Blue, Oxford Sailing Club
15 February 2020
How do I get to the Grand Finals?
The Grand Finals of the GBSC are designed to celebrate the best of everything in small-boat racing in Great Britain. So there are many ways to qualify....
Finish in the top 10 of the travellers’ series (based on your best three results)
Top qualifiers in a number of boat categories:
Fast Asymmetric
Fast Other (ie, not an asymmetric!)
Slow Asymmetric
Slow Other (ie. not asymmetric)
Multihull
Sportsboat
Best Improver
Most attended
Any boat valued at less than £1000
Top qualifiers in a number of age and other categories, for example:
Youth (Under 19)
Master (Over 60)
Female
Two Generations (two people sailing together, minimum age gap of 18 years - could be parent/child but not necessarily)
There will also be a number of ‘wild card’ invites available based on various criteria.
Hang on, but what even IS the Great British Sailing Challenge?
It’s a series of handicap racing events that take place throughout the year, and it’s open to pretty much any sail-powered craft. The Challenge will involve events throughout the whole year, with the target of around 100 boats taking part in each event on larger waters, and running events close to capacity on smaller lakes and reservoirs. Competing sailors will earn ranking points from each event they compete in, with the top 100 sailors invited to a winner-takes-all-final in Autumn 2019 to award the best sailors of the year.
Who came up with the idea?
The idea comes from the organisers of the Seldén SailJuice Winter Series which has been one of the big success stories of the past decade. Organised by Andy Rice of SailJuice.com (sailing journalist and marketer) and Simon Lovesey of SailRacer (event organiser and GPS tracking expert) is about to enter its 10th season and this year is sponsored by mast maker Seldén. If you’re familiar with the SailJuice Winter Series, then this will give you an idea of what’s on offer, except with a few key differences.....
All Year Round
The Seldén SailJuice Winter Series takes place in the cold months. The GBSC takes place throughout the year and will incorporate some of the events in the Seldén SailJuice Winter Series as well as a number of other existing events, along with some brand new ones too.
Great Lakes and Dynamic Handicapping
One of the key reasons for the success of the SailJuice Winter Series is the introduction of the Great Lakes handicap numbers, a refined version of the standard RYA PY numbers. We’re taking the proven formula of the Great Lakes numbers for the jump-off point for the Great British Sailing Challenge, and then we’re using GPS trackers on the competing boats to start analysing the numbers in greater detail. We call this ‘Dynamic Handicapping’. Whereas the numbers in the Great Lakes are analysed and altered once a year, GPS-based Dynamic Handicapping enables much faster and more frequent analysis of the relative performance of different types of boat. Like Strava, the mobile app which has revolutionised the cycling world, or Park Run and what it has done to popularise running, the organisers are taking a ‘Big Data’ approach to the sailing world.
Over time, this will make it possible to produce accurate handicaps for:
different wind strengths
older, less competitive boats
sailors of different abilities, from virtual beginners to world-class athletes.
The sailing calendar’s already busy, do we really need more events?
It’s true, we’ve got loads of sailing events taking place almost every weekend of the year, especially during the summer months. But the majority of those events are not very well attended, especially some of the single-class open meetings where some of the less popular classes sometimes struggle to attract more than 10 boats. We don’t think that’s a sustainable way of running an event, either from the class’s point of view, or the club’s. With a multiclass approach to open meetings, we can create the scale for events that are more fun, and that a club really wants to host.
www.sailingchallenge.org

The Great British Sailing Challenge is a series of handicap racing events that take place throughout the year, and it's open to pretty much any sail-powered craft. The Challenge will involve events throughout the whole year, with the target of around 100 boats taking part in each event on larger waters, and running events close to capacity on smaller lakes and reservoirs. Competing sailors will earn ranking points from each event they compete in, with the top 100 sailors invited to a winner-takes-all-final in Autumn 2019 to award the best sailors of the year. The series is managed by SailRacer.